Journey of an active woman
and of a loving woman

1989: Diploma of Expertise in Real Estate in Paris (France)
1987: Diploma of FNAIM Property Administrator (France)
1975: DEUG in languages ​​option economics at the University of Paris X (France)
1972: Baccalaureate in Economics from the Academy of Strasbourg (France) 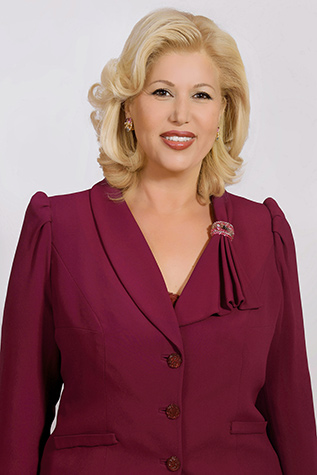 Mrs. Dominique Ouattara , has enjoyed a distinguished career as a business leader, particularly in the real estate industry.

In fact, in 1979, she was CEO of AICI International Group, real estate company which brings together agencies in Africa and Europe.

In 1993, a management firm of condominium manager, "Malesherbes Gestion" , which manages more than 200 Parisian buildings, completes the expansion of the AICI International Group.

In 1996, she was appointed CEO of EJD Inc., a company that manages the Jacques Dessange Institute in Washington. In 1998, she acquired the Jacques Dessange franchises in the United States and then became CEO of French Beauty Services which manages all the brand's American franchises, hairdressing schools and the distribution of Dassange products.

Following the election to the Presidency of the Republic of Mr. Alassane Ouattara in 2011 and in accordance with the campaign commitments he made, Mrs. Dominique OUATTARA resigns from all her professional functions to devote herself exclusively to her role of First Lady of Côte d'Ivoire and his Children of Africa Foundation. 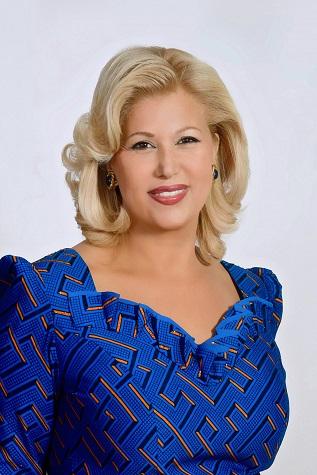 Very involved for two decades in humanitarian action, Mrs. Dominique Ouattara materialized her social commitment in 1998, by creating the Children of Africa Foundation who works in 11 African countries and particularly in the Ivory Coast. From then on, she set up a real multinational organization, with several volunteers and generous souls, eager to relieve the most disadvantaged children on the African continent. Twenty years after its creation, the Children of Africa Foundation continues its humanitarian action in favor of children.

Around his Cabinet and his Foundation, his actions materialize :

In the fight against child labor

Committed to the elimination of the worst forms of child labor in Côte d'Ivoire in all areas of economic life, Mrs. Dominique Ouattara has been appointed to head the National Monitoring Committee for actions to combat trafficking, exploitation and child labor (CNS), on November 03, 2011 by the President of the Republic. To this end, it is working with national and international partners for the elimination of this scourge in Côte d'Ivoire and without the West African sub-region.

The mission of this committee is to monitor and evaluate the actions of the Government in the fight against the exploitation of children. The activities of the CNS and its partners have led to the successive adoption of two National Action Plans (2012-2014 then 2015-2017), to significantly reduce the worst forms of child labor in the country. The third (2017-2019) is in progress.

The most recent project of the Madame Dominique Ouattara Foundation consists of the construction of three transit centers for children , in the towns of Soubré, Ferkessédougou and Bouaké (Ivory Coast), in order to come to the aid of children formerly victims of trafficking, and torn from the hands of traffickers. These transit centers will provide the assistance and protection necessary for the balance and reintegration of children while they rejoin their respective families. The first of them, opened in Soubré in April 2018.

In the same vein, and thanks to the intervention of Mrs. Dominique Ouattara with the International Labor Office , a list of hazardous work , and another from light work allowed for children aged 13 to 17, have been established. This is indeed the sign of significant progress in this fight, which has notably earned Côte d'Ivoire, to be favorably reclassified by the United States in the list of countries making considerable efforts to eradicate this struggle, phenomenon.

Madame Dominique Ouattara, also favored the involvement of other First Ladies on this theme, notably during the Conference of West African and Sahelian First Nations held in Abidjan in November 2017 .

In the health sector 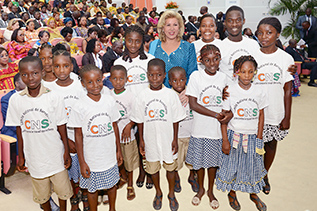 Mrs. Dominique Ouattara also pays particular attention to health, with an increased commitment to the elimination of mother-to-child transmission of HIV and for the promotion of pediatric treatment, a mission for which UNAIDS has distinguished him and appointed Special Ambassador .

In this context, she leads numerous pleas in favor of the organizations involved in this cause, and works to strengthen the technical platform of health establishments, particularly maternities. .

In addition, several public health campaigns, in favor of the most disadvantaged, organized by the Children of Africa Foundation, have made it possible to vaccinate, deworm and examine the eyes of many children free of charge. Several thousand of them have even received corrective lenses or an intervention entirely free of charge.

Mrs. Dominique Ouattara also initiated the construction of a hospital with 130 beds and places dedicated to Mother and Child , with a view to contributing to the reduction of maternal, neonatal, infant and juvenile mortality and morbidity. Built on a plot of four and a half hectares, the Mother-Child Hospital of Bingerville has in addition to its various advanced services, a pediatric oncology wing. The level 5 health facility opened its doors to the public in March 2018, on the 20th anniversary of the Children of Africa Foundation. Those are 25 billion FCFA , including 18 billion FCFA in construction and 7 billion FCFA for equipment, which were allocated to the realization of this project, financed by the generous donors of the Foundation.

For the empowerment of women 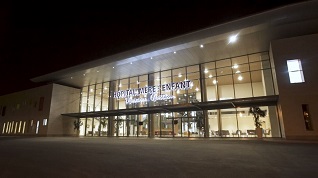 Firmly believing in the economic potential of women, Mrs. Dominique Ouattara created in 2012, with the support of her husband, the Support Fund for Women of Côte d'Ivoire (FAFCI), to finance their micro-projects. The objectives of this fund are to empower women and strengthen their entrepreneurial capacities. The FAFCI is accessible to all women in Côte d'Ivoire without any distinction. To date, FAFCI has 215,000 beneficiaries throughout Côte d'Ivoire, with a return on investment that has enabled the distribution of more than 30 billion CFA francs.

To this must be added direct support to women's groups in agricultural equipment and inputs.

Help with schooling and other social actions 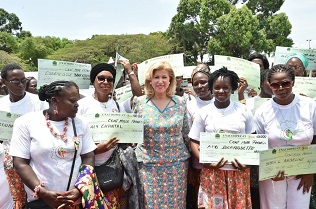 In 2018, Mrs. Dominique OUATTARA created the Case des Enfants which is the home of the Children of Africa Foundation for orphans, children in distress and street children.

Each year, the Children of Africa Foundation organizes a Christmas Tree at the Presidential Palace which brings together 3000 children from all walks of life. Christmas trees are also organized across the country.

One of the major actions of the Children of Africa Foundation is the granting of 16 reception centers for vulnerable children across Africa.

In addition, in Côte d'Ivoire, the Foundation has built three centers for children in distress. Those of Soubré and Ferké are transit centers intended for the fight against trafficking, exploitation and child labor. That of Bouaké is a center for the reintegration of minors.

In the field of education 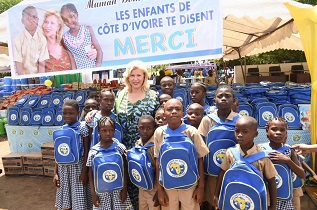 The Foundation built a high school in the city of Kong in 2000 and a school of excellence in the municipality of Abobo in 2020 .

To encourage and facilitate access to education for the most disadvantaged, at the start of each school year, the Foundation organizes distributions of school kits to several thousand schoolchildren. The Children Of Africa Foundation is also setting up libraries and multimedia centers across the country. It also brings reading to students everywhere in Ivory Coast through bookmobiles which are buses converted into libraries. 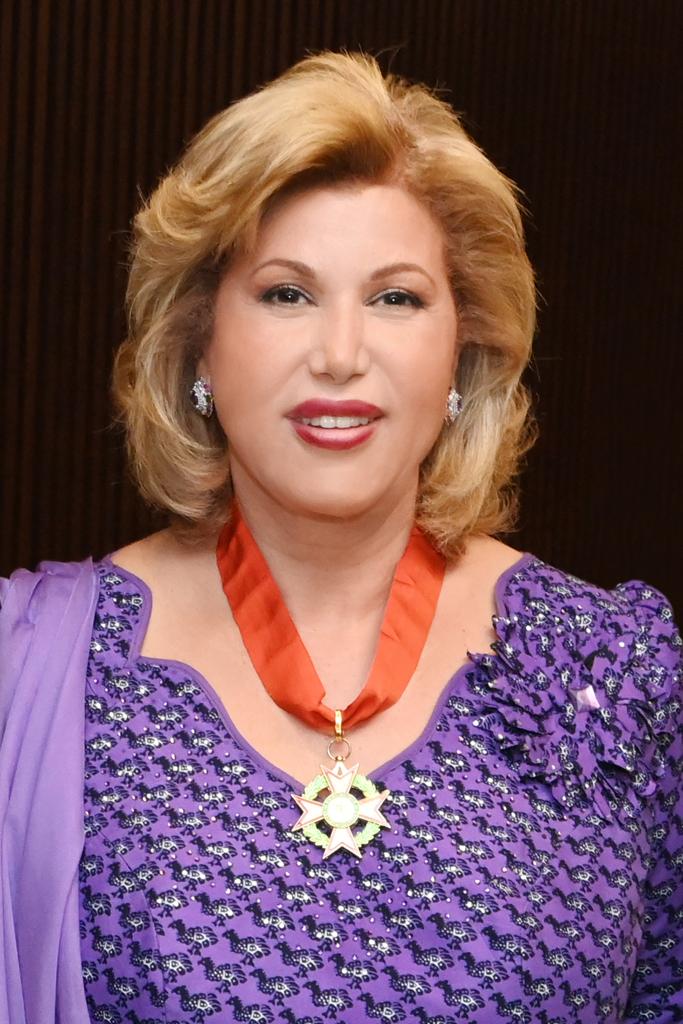