INAUGURATION OF A CHILDREN'S CENTER IN FERKESSEDOUGOU 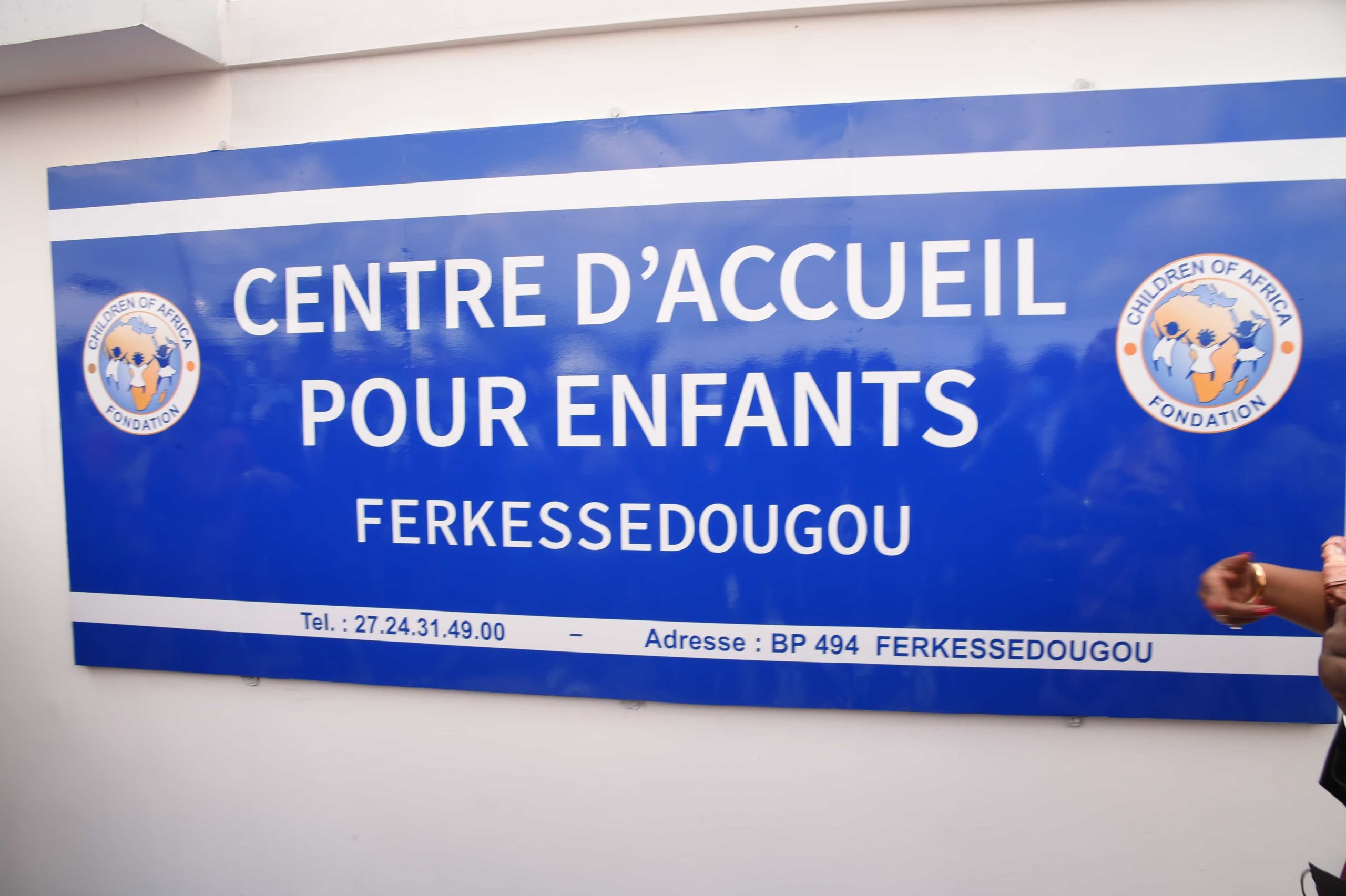 The inauguration ceremony witnessed the participation of Adama Karama, Minister of Employment and Social Protection and President of the Inter-ministerial Committee for the Fight against Trafficking, Exploitation and Child Labor (CIM), Mrs. Nassénéba Touré, Minister of Women, Family and Children and Vice President of the CIM, General Issa Coulibaly Governor of the Savanes District, several Government officials, Ambassadors accredited to Côte d'Ivoire and several other personalities, as well as the people of Ferkessédougou.

The transit center estimated at more than one billion CFA francs, is the third center built by the Children of Africa Foundation to respond efficiently to the issue of child trafficking, exploitation and child labour.

For reasons of sound financial management and transparency the management of the center is subject to a tripartite agreement. Indeed, like the Soubré center, the center has also been made available to the Ministry of Women, Family and Children. The Cotton and Cashew Board will provide financial support to the Ministry for the operation of the center. The center is to provide assistance to  victims of child trafficking, exploitation and child labour who sometimes live in extremely vulnerable conditions and need help.

The Ferkessédougou center for children is built on a 2 hectare land. It has a capacity of 80 beds for girls and boys aged 17. The centre has offices, 03 classrooms, a bait house, a plot of land for agro-pastoral activities, a training room, an infirmary, a big multi-purpose room, a library with computer equipment with internet access, a television room, a dining room, a kitchen, bedrooms for the staff, and a sports field.

The Children Of Africa Foundation’s commitment to help children

The construction of these three (03) children’s centres by the Children Of Africa Foundation since 2016, is to better respond to a need to fight child trafficking, exploitation and child labour. According to Mrs. Dominique Ouattara the Children Of Africa Foundation wants to bring its contribution  in addressing the thorny issue of child labor. She recalled that it was in March 2016 that a fundraiser was held by the Foundation during a gala dinner for. On June 07, 2018, the 1st center was inaugurated in Soubré, then on December 05, 2019, the second center was inaugurated in Bouaké. It received children in conflict with the law, and was entrusted to the Ministry of Justice and Human Rights. Finally, the third center was inaugurated on October 28, 2021. "Today, Thursday 28 October 2021, we have the great joy to inaugurate the Ferkessédougou center to take care of victims of child trafficking, exploitation and the worst forms of child labor," said Mrs. Dominique Ouattara.

Ferkessédougou, a cross-border for child trafficking

For Mrs. Dominique Ouattara, the city of Ferkessédougou was chosen because of its geographical location.  This town located in the north of Côte d'Ivoire, is a cross-border for child trafficking. "Indeed, in this region many children are used to work in cotton and cashew plantations and other businesses and are often used for illegal gold panning and begging. This situation prevent children to attend school and have access to a good education," explained Mrs. Dominique Ouattara. The First Lady believes that the center is a strategic response to child trafficking and is also in line with the National Action Plan 2019-2021. "At the center the children will receive psychological support, medical care. The kids will also have access to learning and training before returning home," said Madame Dominique Ouattara.

"For my part, I hope that the child trafficking and exploitation will be eliminated forever, for the happiness of our children and the harmonious development of our society," She ended.

Mr. Téné Birahima Ouattara, Minister of State, Minister of Defense and President of the Regional Council of Tchologo, thanked the First Lady for her numerous actions on behalf of the people of Kong, Ferkessédougou and Ouangolodougou. He also welcomed the opening of this center which, according to him, is a pragmatic response to the thorny issue of trafficking, exploitation and child labor.

Mrs. Nassénéba Touré, Minister of Women, Family and Children and Vice President of CIM, welcomed the construction and inauguration of this center which was placed under the supervision of her ministry.

For Mr. Marc Vincent, UNICEF Resident Representative, the opening of this center marks a decisive step in the process of remediation of the child labor phenomenon.

Dr. Adama Coulibaly, Director General of the Cotton and Cashew Board and Mr. Ouattara Kaweli, mayor of the city of Ferkessédougou thanked the First Lady for her commitment to the wellbeing of children.

The First Lady also offered food, non-food items and cash worth 61 million CFA francs to the new center, the people and the schools of Ferkessédougou. In return, the people of Ferkessédougou expressed their gratitude to the wife of the Head of State by offering her many gifts.

The ceremony ended with a guided tour of the new reception center for children in Ferkessédougou.

Helping victims of child trafficking,exploitation and child labor in the Tchologo region

Inauguration of the Ferkessédougou Children’s center