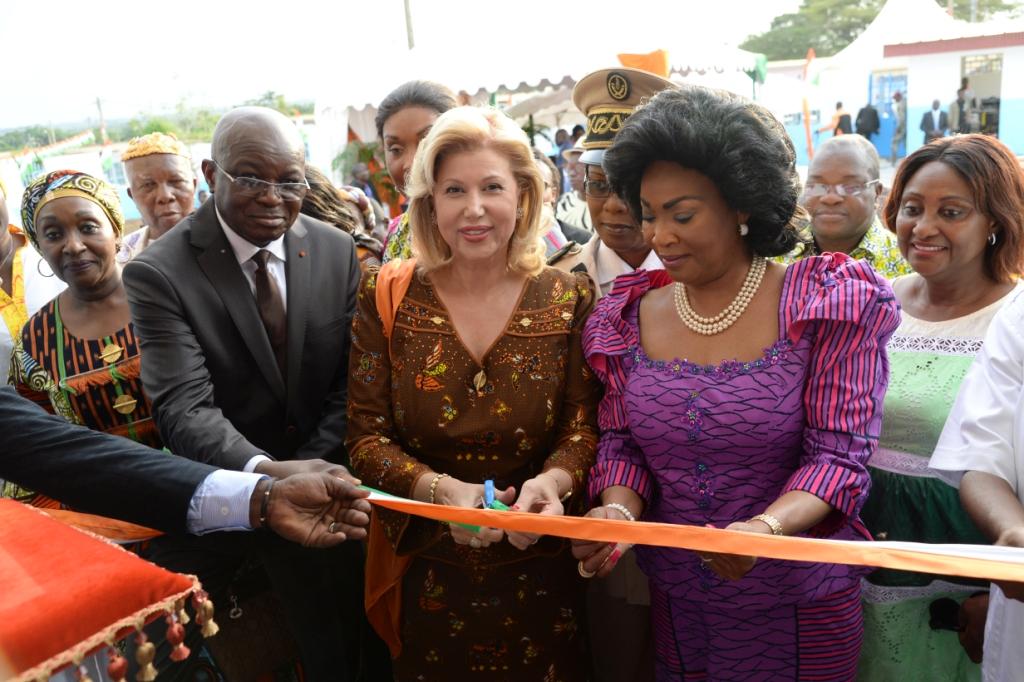 Mrs. Dominique Ouattara, President of the Children Of Africa Foundation, inaugurated and equipped a health centre in Dimbokro on Thursday, September 26, 2019 on the sidelines of the State visit of the President of the Republic to the N'Zi region.  Built by the Dimbokro City Hall, this new health centre, which will provide better medical care for the population, will be named after Mrs Dominique Ouattara. The information was given by Mr. Bilé Diemeleou Amon Gabriel, Mayor of Dimbokro.

The inauguration ceremony took place in the health facility, and witnessed the participation of Mrs Clarisse Duncan, wife of the Vice-President of the Republic, Mrs Raymonde Goudou Coffie, Minister for Modernisation of Administration and Innovation of the Public Service, Mrs Mariatou Koné, Minister of Solidarity, Social Cohesion and the Fight against Poverty, Mrs Aimée Gbaguelehon Zebeyoux, Secretary of State in charge of Human Rights, Mrs Myss Belmonde Dogo, Secretary of State to the Minister for Women, the Family and Children, Mrs Sita Keïta, younger sister of the Head of State and Mayor of Gbeleban and many other local personalities.

During the ceremony, Mrs. Dominique Ouattara donated important medical equipment worth 13 million CFA. In addition, she offered 7 million F CFA to the people of the locality. The total value of the donations amounts to 20 million F CFA.

Taking the floor, Mrs. Dominique Ouattara, President of the Children Of Africa Foundation and UNAIDS Ambassador, encouraged people and pregnant women in particular to attend the centre for a better medical follow-up.

Mr. Amon Jean, Director of Health of the N'Zi Region representing the Minister of Health and Public Hygiene, welcomed the inauguration of the centre. He recalled the First Lady's commitments in terms of health. According to him, the actions of the wife of the Head of State are in line with the health development policy of his ministry.

Mr. Bilé Diemeleou Amon Gabriel, Mayor of the commune of Dimbokro was extremely happy to see that the centre is finally  inaugurated . He took the opportunity to  thank the wife of the Head of State for her support to the people.

Mrs. Kouassi Agathe married Konaté, spokesperson for the women of Dimbokro thanked Mrs. Dominique Ouattara for her many actions for the benefit of women and children.

The ceremony  ended with a visit to the new "Dominique Ouattara" health centre.

Inauguration and donation of sanitary equipment