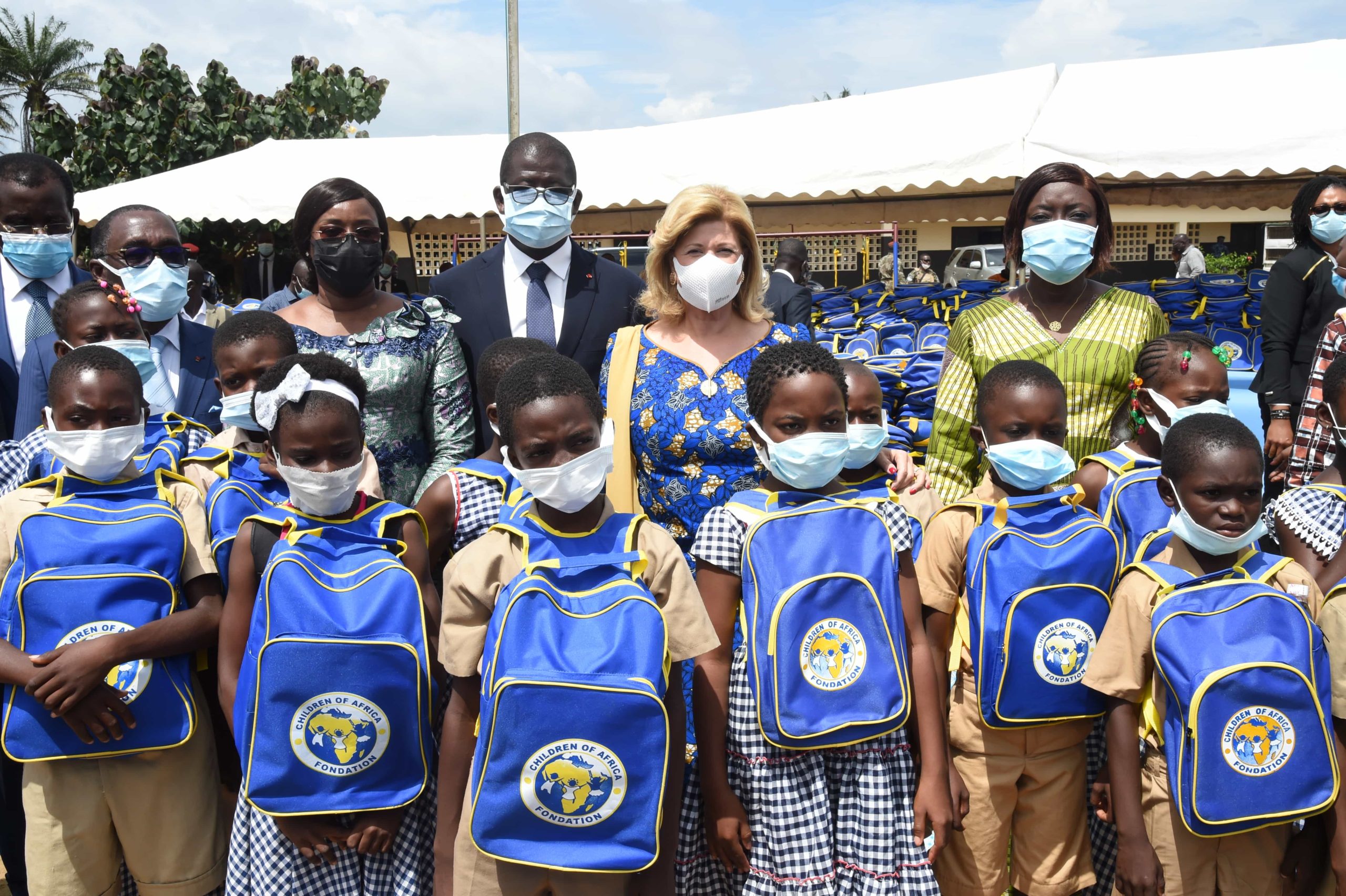 The Children Of Africa Foundation has launched the 2021 edition of its campaign for the free distribution of school kits to disadvantaged children in the country. Indeed, Mrs. Dominique Ouattara, President of the Children Of Africa Foundation, has donated 16,000 school kits including school bags, school supplies and books to underprivileged schoolchildren in 40 localities of the country, to NGOs and groups.

The official launching ceremony of the school kits distribution took place on Tuesday, September 28, 2021, in the premises of the Adiaké School Complex.

The ceremony was chaired by Mrs. Dominique Ouattara, President of Children Of Africa, and witnessed the participation of Mr. Eugène Aka Aouélé, President of the Economic, Social, Environmental and Cultural Council, and President of the Regional Council of Sud Comoé, Mr. Pascal Abinan Kouakou, Minister and Governor of the Autonomous District of Sud-Comoé, Mrs. Mariatou Koné, Minister of National Education and Literacy, as well as many other personalities and Chiefs.

16,000 school kits worth 105 million CFA francs will be graciously offered to children in difficult circumstances. The Sud Comoé region, will receive 5,000 school kits, including 1,500 for the city of Adiaké. In addition, the wife of the Head of State also offered food and non-food items to schools, and some  equipment for the nursery. Thus, for the city of Adiaké, the donation amounts to 50 million CFA francs. In addition, Mrs. Dominique Ouattara offered 10 million F CFA for the Kings, traditional and religious chiefs, students, teachers and the community.

In her speech, the President of Children Of Africa stressed on the importance of such initiative for children . "Last year, despite the coronavirus pandemic, we were able to offer 10,000 school kits to our children throughout the country. Today, we are happy to give more school kits to help our community and educate them around the value of schooling. Indeed, education is a fundamental right for every child. Bringing education to a child is to give him/her the chance to succeed in life, regardless of the social background he/she  is coming from", said Mrs. Dominique Ouattara.

Since its inception the Children Of Africa Foundation has distributed 150,000 school kits

Mrs. Dominique Ouattara also revealed that 150,000 school kits have been distributed free of charge to children in difficult situations in Côte d'Ivoire since the foundation was created in 1998.

To the women of the city of Adiaké, the First Lady promised she would return to make financial donation worth 100 million CFA francs in order to support their income genrating activities.  She also promised to increase the FAFCI fund to 300 million CFA francs . She ended by reiterating her support to students’ parents and by giving some advice to the children.

Eugène Aka Aouélé, President of the Economic, Social, Environmental and Cultural Council, also President of the Regional Council of Sud-Comoé expressed his thanks to the First Lady for her constant support to his community.

Mrs. Mariatou Koné, Minister of National Education and Literacy also took the opportunity to thank Mrs. Dominique Ouattara for her commitment to improving education in Côte d'Ivoire. She noted that the Government of Côte d’Ivoire has also implemented a program for the distribution of school kits to school children in the country. To date, the Government has spent about 100 billion CFA francs for 34 million school kits distributed to schoolhildren across the country.

Hien Sié Yacouba, Mayor of Adiaké also expressed his thanks to Mrs. Dominique Ouattara for her charitable actions towards children and women.